When entrepreneurs Kylee Hays and Leitia (Lay-shuh) McHugh started looking for a shared location for their two, growing businesses, they knew what they wanted to find. 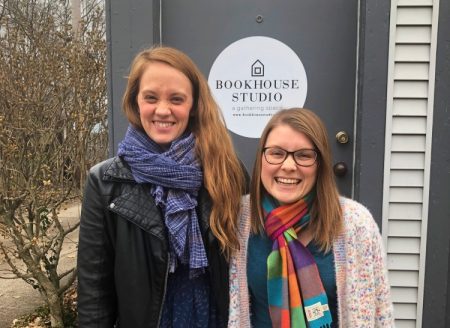 Hays wanted an open space to host events, while McHugh desired a space with natural light that was close to home to accommodate her family.

So when they found a house-like building at 1412 Delaware Ave. nestled in the heart of Fort Wayne’s highly coveted Forest Park Neighborhood, they knew it was the perfect fit. The building, which formerly housed a marketing firm, dates back to the 1920s with hardwood floors, tall ceilings, and historic woodwork throughout. Now, it’s home to two new, creative ventures.

While these modern business concepts are unique in a historic neighborhood, both entrepreneurs say their neighbors have welcomed them with open arms since they opened in October.

“We were blown away by the community support,” McHugh says. “We had about 100 people through our doors for our open house up until the time of closing our doors.”

So what do the Bookhouse Studio and the Confetti Post do?

Input Fort Wayne sat down with the entrepreneurs to hear their stories and learn more about their shared interest in engaging the Fort Wayne community.

When Klyee Hays moved to Fort Wayne for her husband’s job, she knew it was time to plant roots.

Having moved two previous times, she was ready to find her community, and she had an idea for a business.

After finding herself in the pit of postpartum depression, she began practicing yoga and realized how incredibly helpful it was to her, so she wanted to share her passion for yoga with others.

She completed training to teach yoga and meditation and combined that with her background in social work to become an instructor at Simply Yoga Studio in Fort Wayne. But after teaching there for awhile, she wanted to find her own space.

She envisioned a place where she could not only teach yoga, but also invite the community in to host events and test ideas of their own.

From this, Bookhouse Studio was born. Hays says Bookhouse is an intentional blank space to be used for all types of gatherings where people can learn and connect.

An introvert herself, she was craving the closeness of community around her, which inspired her to rent her space to community members. On hard days, she says the connections she’s made in Fort Wayne are what keeps her going.

With a maximum capacity of 25, Bookhouse is ideal for intimate gatherings, Hays says. She describes the atmosphere as “cozy, intentional, and welcoming.”

In addition to yoga, events like workshops, craft gatherings, and kid’s classes have taken place in the studio so far.

For more information, connect with her on Instagram at @bookhousestudio.

Similar to the beginnings of Bookhouse Studio, the Confetti Post came to be after McHugh had her second child and felt for an entire year that she was ready to get out of her house and do something more adventurous.

She loved being a mom, but she wanted to do something else, too. So in March of 2016, her passion for parties met a little Pinterest inspiration, and her idea for a party-in-a box company was born.

On her website, McHugh describes the concept as “kind of like a care package, but a lot more fun and without all the work hopping from store to store to find the perfect items, buying a boring box, then fighting the lines at the post office.”

She started the business in her basement and quickly expanded it to her daughters’ room. With steady growth, the Confetti Post doubled its sales in 2017 and needed more room.

Today, it’s a full-fledged online business that allows people to send themed care packages for birthdays, cheer-ups, and other (wittier) occasions, like pity parties. Visit the website and choose from dozens of options in package sizes ranging from $22-$104.

When collecting items for each package, McHugh says she makes it a point to give back by sourcing products from other small businesses and focusing ethical production as often as possible. She often buys from vendors she finds on Instagram, Etsy, New York Now, and through other online connections.

She recently hired two more people to join her team, so she has more time to focus on marketing her business in the Fort Wayne community.

Although the Confetti Post lives online, she says she still desires to interact with the local community daily. In fact, her office even has a tiny storefront open to the public for visits. Typical hours are Monday-Friday from 9 a.m.-2:30 p.m.

For more information, connect with her on Instagram at @theconfettipost.