Two Huntington University alumni have started their own food truck business, which aims to build community through their food. 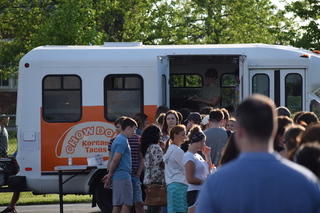 Hannah Britton, the general manager of Chow Down takes orders from a line of customers from the window of the Chow Down Food Truck.

Edwin Chow, the owner of Chow Down, and Hannah Britton, the general manager, are dishing out Korean tacos, loaded nachos, and other creations from the Chow Down Food Truck. The truck serves the greater Fort Wayne area including Huntington, Warsaw, and Columbia City.

“What we love about the food industry is the potential,” said Chow. “The ability to gather people and gather communities around.”

At first glance, the white-and-orange, retrofitted bus looks like any other food truck, but a closer look reveals verses from The Bible and prayers written along the exterior. The verses and prayers are a conversation starter according to Britton, who says many customers will ask about them while she’s serving them.

“If we don’t get to explicitly say that then we trust that through kindness and love and other simple ways we can stand out,” said Britton. “That something is being shared.”

Chow says the goal is to help people of all backgrounds, ethnicities, and genders to take one step closer to knowing Jesus. They have provided food for Campus Life groups and a youth ministry group in New Haven called The Hub at The Crossing Community Church.

“We want to meet physical needs by feeding people as well as spiritual needs through relationships,” Chow said.

Chow and Britton knew they wanted to utilize food to build community since both had ministry-related degrees from Huntington University and both also worked in the food industry. A restaurant was out of the question because they wouldn’t be able to stay at their regular jobs. Chow works for Youth for Christ in Fort Wayne and Britton works at Place of Grace in Huntington, so when Britton threw out the idea of a food truck, they saw it as an opportunity to merge their passions.

“We kind of laughed it off if we’re being serious,” Chow said. “But that month we both just kept thinking about the food truck.”

The bus underwent a retrofitting process to become a food truck, but Chow and Britton didn’t want to wait until the food truck was finished to start gathering people and preparing food. A menu was developed by experimenting with recipes.

They tested their food creations on a community of people who gathered every Wednesday night from February through the first week of June. They continued testing until the week before opening the food truck.

“Edwin has put in an incredible amount of work, and so have I,” Britton said. “But just with all of our efforts, if the Lord’s hand wouldn’t have been in it the way that it was it would not be what it is.”

Since their launch at the Jorgenson Famliy YMCA in Fort Wayne, they have catered for weddings, graduation parties, business lunches, church events, and were a part of the grand opening of Promenade Park in Fort Wayne.