Of all things to mark Virginia’s Richardson’s one-year anniversary of starting her business, Tilde Multimedia Firm, it’s the SOS Band.  Of all things. 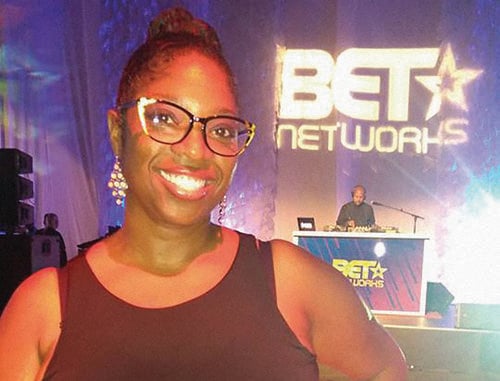 Virginia Richardson was first featured in Issue 22 | Volume 1 of the FWIS.  This is her follow-up.

Last October 2018, Richardson was referred to the R&B group, best known for their songs “Take Your Time,” and “Just Be Good to Me,” for her concert production work by the nationally-known DJ Keylo (aka Who Is Keylo).

As reported in her previous Fort Wayne Ink Spot article, “BET and VH1 Are on Her Resume,” Richardson handled sound design/audio production and special events management for the ubiquitous Viacom Networks.  The group was performing at Purdue Fort Wayne (PFW), and the school’s Special Events department was looking for someone to oversee their audio, video, and lighting management.  PFW became Richardson’s first client.

When SOS performed at the Summer Community Celebration in August, they asked Richardson to run their Facebook Live camera for the show.  Now, she can mark her one-year anniversary, with the memory of where she began and where’s she going; SOS and Tilde Multimedia Firm are in negotiations for Richardson to manage all of their social media.  “The calendar is still in edit mode,” she said.

Since her FWIS appearance, definitely of late, Richardson has been busy, as folks say.  She’s launched a Facebook Live talk show, Real Coffee Convo, where a group of friends discuss current events and highlight business owners…sometimes setting their live shows in the actual business they’re talking about, like a recent show recorded in the Simple Foods Café at 2000 Brooklyn.  Like with a lot of her goals, she wants to take the idea nationwide.

Richardson parlayed her Build Fort Wayne tutorship into an opportunity to manage SEED’s social media’s campaign.  She became a recipient of the Fortitude Fund (formerly the Farnsworth Fund).  She worked with the Madam CJ Walker Legacy Center over the summer, helping to promote some concerts for June’s Black History Music Month.  There’s the Fort Wayne Comedy Club.  She manages social media directives for PQC (Trains, Tech, Works, and Windrose Urban Farm), a project management, IT services, and training company that’s just been named the 2019 National Small Business 8(a) Graduate of the Year.  She has created new digital solutions for businesses such as for Sodexo FWCS. acting as their Social Media Recruiter.  She estimated that she probably makes about 10 to 15 times more than a year ago.  So, progress.

The thing with progress when you work for clients…websites and Facebook pages get updated for them, hardly ever for the contractor.  Priorities shift to and remain on the client.  One of Richardson’s biggest challenges, she said, is bookkeeping and finance.  “Sometimes when you wear all of the hats, you lose yourself.  You can’t do everything.”  Richardson needs a multimedia producer, someone she can throw some work to, like a design or a video person, because not one of her ideas has a tether.  She wants to have a TV network.  And a national newspaper.  Her idea for a publication that focuses on incarcerated citizens, written by them, for them, is en route.  Next year.