At ‘All the Rage,’ things get broken

By Fortitude FundNovember 7, 2019No Comments

Most people do not wake up wishing to have a bad day – at least I don’t think they do.

But on a recent Friday, I rolled out of bed with the hope that something would go wrong. I wanted something that would upset me, make me mad. Maybe even enrage me. 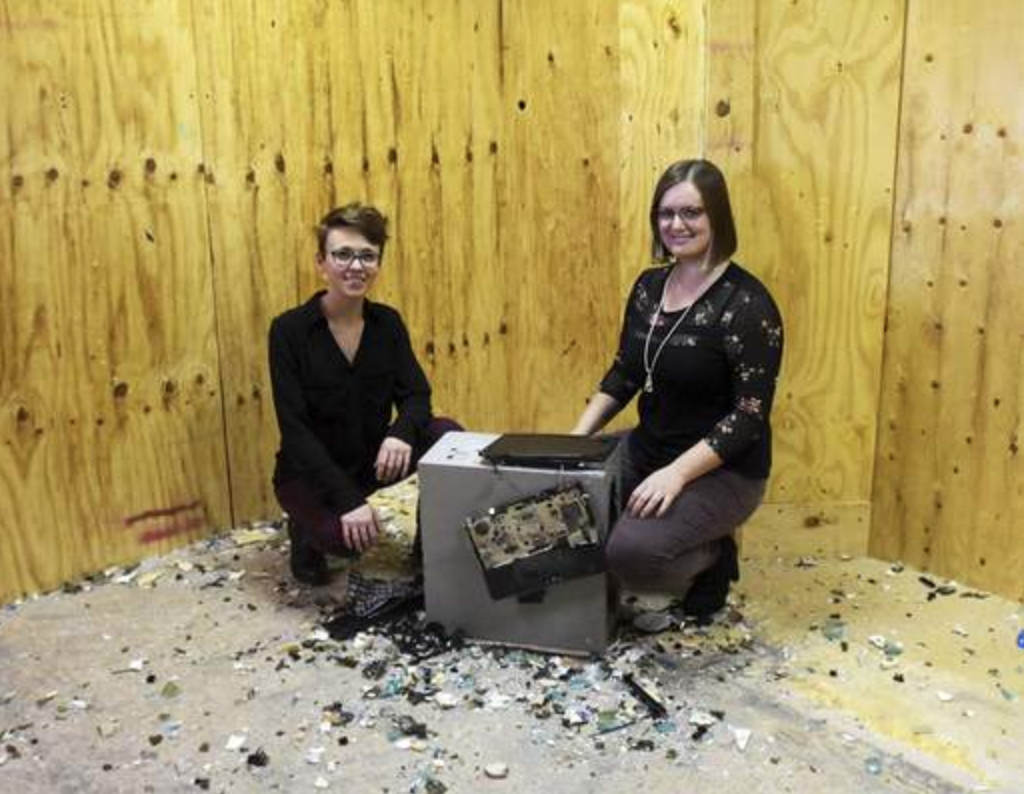 On this particular Friday, I had 15 minutes blocked off to experience what could be the next craze in the city – a rage room.

All the Rage opened this summer at 2307 Spy Run Ave., at the corner of West State Boulevard and Spy Run Avenue. Owned by Brianna Dailey and Abby Greutman, the business was inspired by the big city trend and the goal of promoting mental health while being a part of the growing entertainment scene in Fort Wayne.

Rage rooms began a decade or so ago in Japan, with the idea slowly spreading west – to Europe and eventually the United States.

In a rage room, participants can release their emotions by breaking, smashing and otherwise destroying items in a safe environment.

At All the Rage, participants get the opportunity to break items by throwing them against the wall or floor in a safe room that’s constructed with plywood. Items can range from dishes, televisions, keyboards and bottles. Tools of destruction include crow bars and baseball bats.

Clients can also bring their own possessions to destroy, although the team at All the Rage is cautious to make sure that the items chosen are for good fun rather than vengeance.

A pair of Bluetooth headphones hung around my neck with black buds in my ears. It was the final piece of gear that you put on before entering a room at All the Rage. With a focus on safety, clients are instructed to wear closed-toe shoes and are also given a white jumpsuit, gloves and helmet with goggles.

I hit shuffle on my iPhone and entered the plywood room, ready to work out any frustration.

While Greutman says a session in the rage room can be a good workout, I didn’t think that C&C Music Factory was the best music to throw dishes and wine bottles against the wall.

I made a quick change to the playlist and with Mötley Crüe’s “Kickstart My Heart” playing, I shut the door of the room. I picked up a wine bottle from the half-dozen sitting on the floor, stepped back and pitched it at the plywood wall.

But as it bounced back and nearly skidded across the floor, I was the one who felt thrown.

Along with the smaller items in the room, old televisions or computer monitors can be added.

Donations are accepted, while other items are purchased secondhand, Greutman says. The business is also partnered with Bisque It Pottery, which donates items that are cracked or have been left behind.

Still others – like a slightly sinister clown statue – were left in the space, which had been an antiques shop.

Gretuman says the goal for the business is avoid buying things used in order to reduce waste as much as possible, with glass being recycled after clients are finished in the rage room.

All the Rage offers a variety of experiences for clients, from BYOB (Bring Your Own Box) to Let’s Rage, which is a 40-minute experience for two people.

The time and number of items varies anywhere from 15 to 40 minutes and 12 items to 25. Clients can also choose additional items for extra cost.

Everyone who enters the door of a rage room must be 18 years old but Greutman says many clients are in their 30s and 40s, while some have been in their 60s.

The appeal is that it’s a chance to take a step back from “adulting.”

“As adults, we have to be responsible all the time. … (At All the Rage), you take the responsibility and throw it out that window.”

Or, in my case, you throw it at a plywood wall … again and again and again. Then, after shirking into a corner for the fifth time, I caught sight of the crowbar.

Almost gingerly, I placed the stubborn wine bottle at a slight distance from my feet, grasped the crowbar with both hands and lifted it over my head.

And then I swung. In a second, a bottle that had seemed unbreakable turned into shards on the floor. I took a second, placed it on the floor as well, and swung. The sound of breaking glass was almost beautiful, complementing the old school rock ‘n’ roll playlist that streamed in my ears.

Empowered, I took the keyboard and placed it on the barrel. I switched out the crowbar for the baseball bat and began to swing.

In three minutes, all of my “Office Space” dreams came true.

Greutman laughed when I handed her my helmet and wanted to talk about TPS reports and red staplers. Apparently, I was not the first person to relate the movie “Office Space” to the experience.

But one of the challenging things to hear is criticism about the business, Greutman says.

People have alleged that the business incites anger rather relieves it or that it is an anger treatment center.

“We’re trying to help people reduce stress and be a good place for the community,” she says, adding that they want to be advocates for mental health.

The owners hope to grow the business, adding additional rooms (there are currently three) and a seating area.

“We would like to be an asset to the community and provide a safe space for people to be.”