Chasing a dream? Art of Beckham draws on the power of ideas

Chasing a dream? Art of Beckham draws on the power of ideas

Davonta Beckham stands in front of a crowd at TedxFortWayne in March.

At 23-years-old, he’s tall and thin with a friendly demeanor. He’s wearing khakis, and a blue button-down shirt with a green cardigan over it. He’s talking to the crowd about the power of imagination.

“For a moment, I’d like to ask you to close your eyes and imagine yourself as a child,” Beckham says.

Beckham draws all of his pieces by hand.

He tells the audience about a time when he tried to fly as a child by jumping off his parents’ couch. It’s something a lot of kids do, he says—whether they’re pumping their legs on a swing set, or bouncing on a bed, or leaping off a couch. 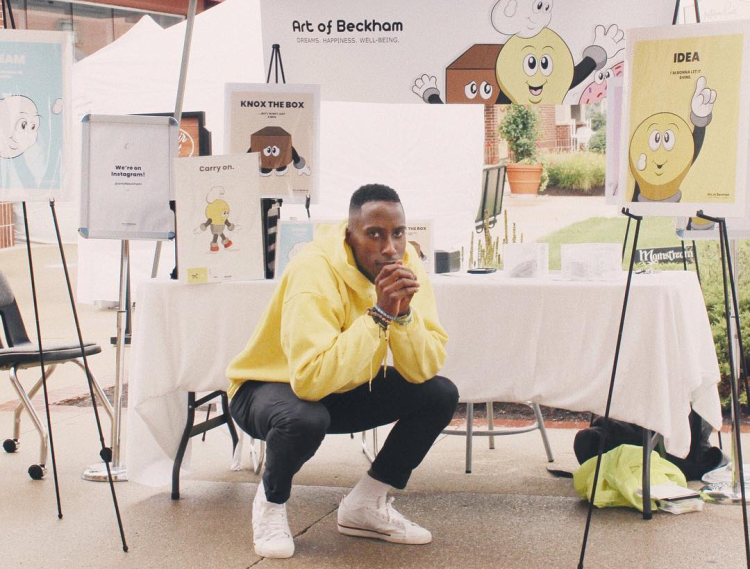 Children believe they can fly.

“Think about how confident you were in that moment,” Beckham says. “Even after realizing it was actually humanly impossible to fly, you probably got back up and tried again—not to be disappointed in your inability to fly, but to feel the exciting rush of that trying, that jumping, that taking the risk brought.”

But as he continues to talk, his tone turns serious.

“You know, maybe some of you have had moments where you felt like your wings were damaged. Maybe things didn’t go as you expected. Maybe you felt like you failed, or maybe even when you jumped off the couch as a child, and you landed on the ground, you got back up, and said, ‘Man, what’s wrong with these things,’” he says looking down at his arms in a moment of exasperation.

“Today, I want to share with you a moment when I truly lost my wings. But through that experience, I actually learned what it truly means to fly.”

Born and raised in Dayton, Ohio, Beckham moved to Fort Wayne to attend Indiana Tech on a track scholarship.

In high school, running was how he felt a sense of purpose in life. But when he broke his foot twice in college, he took it as a sign that he needed to find a new passion to fill his downtime.

“You can get really low in those moments,” he says. “So I just started drawing and focusing on art.”

Beckham has been an artist of sorts since he was a kid, but he let his art take a back seat to athletics for awhile. Then, as he admired the work of other artists on Instagram, like KAWS (Brian Donnelly), Paper Frank, and Hebru Brantley, he began to see how powerful art could be.

“I started realizing what art really was, and that people are really impacted by it,” he says.

So Beckham started thinking of ways that his art could impact people, and he started with a simple idea.

“I just drew this lightbulb,” he says. “We all have so many ideas, and I thought: What if we could see our ideas in real life? What if they could be tangible and really do things?”

So he gave the lightbulb eyes, hands, and feet with running shoes, and he put it into different scenarios, like playing basketball or running track.

Before long, it evolved into a fully animated character with a face, a name, and a personality. Beckham’s friends started asking him to draw custom pieces of art for them using the lightbulb to tell their story or express their ideas.

For instance, if they played tennis, the lightbulb might be impersonating them in a match.

And with that, the Art of Beckham was born.