Representatives of Blaire Biomedical, Angola, attended a ceremony Oct. 19 to receive the first-ever grant provided by the Angola Investment Fund.

Blaire, which emerged out of Trine University, is a start-up company working to develop a hand-held device that performs multiple blood tests in real time when connected to a smart phone. 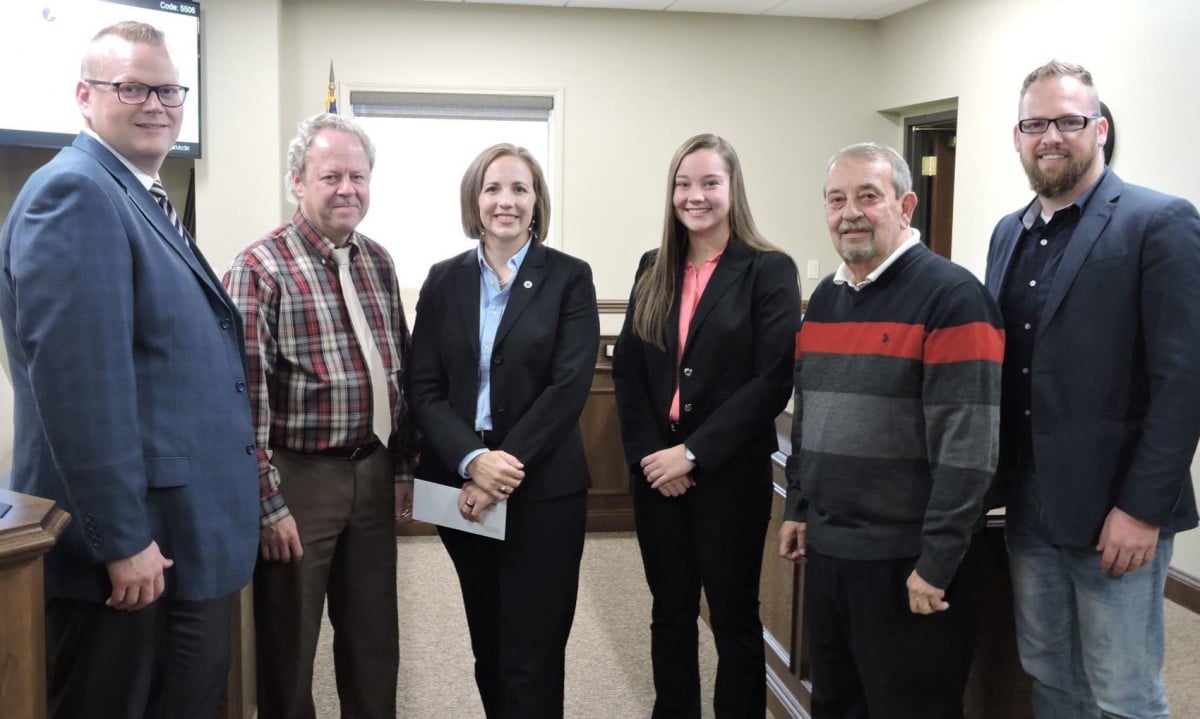 “It’s truly invaluable what you’re doing for the up and coming entrepreneurs,” said Melanie G. Watson, Ph.D., a Trine professor and CEO and founder of the company.

Blaire’s device is currently in the research and development stage. Watson said she’s working with a Colorado company, one of few of its type in the country, on a possible partnership to advance the device’s abilities.

Distribution would be through representatives on each coast, but the company will remain headquartered in Angola, she said.

The device prototype is now in its eighth iteration, following more than five years of research and development, with significant research support coming from Trine University students. The project has been the basis of senior design projects over the past four years.

“Trine University is proud to support Dr. Watson and Blaire Biomedical in their groundbreaking and potentially life-changing research and product development. This effort not only provides Trine University students hands-on, practical experience at the forefront of innovation, it gives them the opportunity to improve the quality of life for many around the world seeking to manage chronic medical conditions,” said Earl Brooks II, Trine president.

Trine student groups have developed methods of separating blood into components for the various medical tests, designed a case than can fit on an iPhone, developed a blood testing cartridge and developed an application to allows results to be read on the phone.

Watson developed the concept for the device after having to travel great distances to have medical tests for her daughter.

“The device is desperately needed,” she said.

It could be used in a multitude of applications and would provide immediate results without having to travel to a hospital or lab environment. For some patients, this not only cuts down on time, but it eliminates the possibility of contracting illness from a hospital environment.

The device is likened to a glucose monitor used by people with diabetes, but with a much broader spectrum. Glucose monitors have a very specific use while the Blaire product would sample for a wide variety of blood characteristics.

The money is allowing Blaire to put together a design team to advance development of the product, which Watson said will be convenient and at a low cost to patients.

“We are excited to present this check to Melanie,” Angola Mayor Dick Hickman said. “We’re really excited about this.”