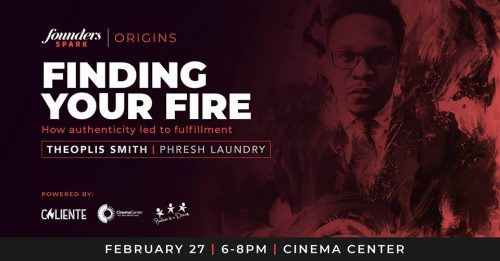 To most, Theoplis Smith, also known as Phresh Laundry, is widely known as an artist. His artwork covers a wide range of topics from racism and gun violence in America, to powerful stories of victory and triumph. He’s captured the attention of his celebrity subjects and has been acknowledged by the likes of stars such as Gene Simmons and Erykah Badu. While his career as an artist has caught fire, he’s also a father of two, a husband, a son, and a man with a story to share with the world.

Theo’s inclination to creativity started at the young age of three. One of four boys, his creativity was sparked and encouraged by his parents. His father, an oil painter, and his mother, a seamstress, his upbringing gave him a lot of permission to exercise his creative muscles and express himself. As Theo grew older, however, he found himself frustrated with his lack of direction and identity. While others flourished and followed their paths, Theo felt he was at a loss.

Join us as for a discussion with Theoplis Smith about his journey with Phresh Laundry and about finding what sparked his fire through the noise of life. We’ll dive into the personal challenges he faced in finding his authenticity and how following that authenticity led him to a passionate and fulfilling career that has influenced and touched so many.

There will be a cash bar, hot drinks, & food provided by Caliente!